Admin at Invest In MJ, we post relevant blogs, news releases and information about the legal Marijuana Industry.

TSX, TSX-V and CSA Clarify Their Positions on Listed Entities with Ties to U.S. Marijuana Market

By Sherri Altshuler and Tyler Brent* from Aird Berlis

The Canadian Securities Exchange (“CSE”) and OTC Markets Group recently announced a strategic alliance to offer a new program for issuers looking to go-public in Canada and have cost-effective access to North American investors. Both the CSE and OTC Markets Group hope to utilize the strategic alliance to introduce foreign companies to the North American capital markets.

The alliance pairs the benefits of public company status in Canada with OTC Markets Group’s secondary market network across the United States. Under the alliance, foreign companies would raise capital through an IPO on the CSE and then broaden their reach to U.S. investors through OTC Markets Group’s dealer network. Securities would then be traded on both the CSE and over-the-counter in the United States, allowing for increased liquidity and access to funding.

Both the CSE and OTC Markets Group have publicly announced their excitement over the alliance, and hope to introduce new and compelling investment opportunities to the North American marketplace. “As a result of our relationship with OTC Markets Group, we expect to offer the most efficient access to North America’s public capital markets for foreign issuers,” said Richard Carleton, Chief Executive Officer of the CSE. “At the same time, with our partners at OTC Markets Group, we will present a series of new and interesting investment opportunities to investors in Canada and the United States.”

We expect the alliance between the CSE and OTC Markets Group will provide companies in the cannabis sector with better access to U.S. investors. As of June 30, 2017, one third of companies listed on the CSE were also quoted on one of the OTC Markets, with the bulk of companies quoted on the OTC Pink (65 companies) or the OTCQB (37 companies).

TSX, TSX-V and CSA Clarify Their Positions on Listed Entities with Ties to U.S. Marijuana Market

On October 16, 2017, the Toronto Stock Exchange (“TSX”), the TSX Venture Exchange (together with the TSX, the “Exchanges”) and the Canadian Securities Administrators (the “CSA”) released separate guidance clarifying their positions on the regulation of entities with ties to the U.S. marijuana market.

The Exchanges released identical notices confirming that listed entities are not permitted to engage in the U.S. marijuana market. The Exchanges have always required applicants and listed entities to comply with all laws, rules and regulations applicable to their businesses. The Exchanges’ bulletins reminded that, despite the “Cole Memorandum,” marijuana remains a Schedule I drug, prohibited by the U.S. federal Controlled Substances Act. Therefore, entities that cultivate, distribute or possess marijuana in the U.S. (“Subject Entities”) are considered by the Exchanges to be engaging in illegal activity in contravention of the Exchanges’ policies. Further, the Exchanges suggested that financial transactions involving U.S. marijuana businesses may contravene U.S. money laundering rules. Non-compliance with the Exchanges’ requirements could lead to a delisting. Those following the space should not be surprised with this news, given that it is simply a formalization of the Exchanges’ recent informal positions.

The Exchanges also warned that entities that own Subject Entities either directly, indirectly or in substance are considered to be engaged in the business of U.S. marijuana, and therefore at risk of delisting. Similarly, entities that target Subject Entities with their products or services, or have commercial arrangements with such entities, may also be considered to be in breach of the listing requirements.

The Exchanges announced that they expect to complete reviews of all of their listed entities by the end of the year. The Exchanges expect listed entities to take steps to ensure they are in compliance with their rules, meaning that some companies may need to divest certain U.S. interests or transfer their listing to other exchanges.

The CSA recognized that there is uncertainty associated with operating in the U.S. marijuana industry because the federal government’s policy towards non-enforcement of the federal prohibition (i.e. the “Cole Memorandum”) could change at any time. However, the CSA considered this to be largely a business risk, and barring public interest concerns, not a securities law violation provided adequate disclosure is made to investors. Specific disclosure recommendations were included in the Staff Notice as replicated here in Table 1. 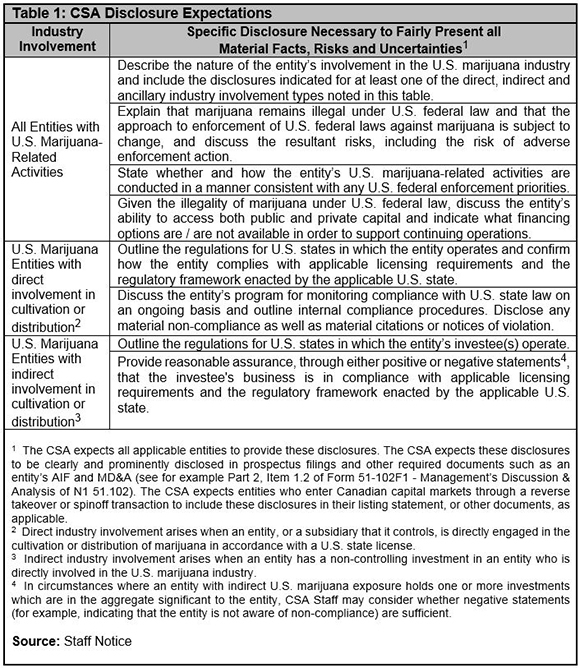 Cannabis companies applying to be or already listed on the Canadian Securities Exchange (“CSE”) will be relieved by the Staff Notice, as it largely accords with the CSE’s existing position. Consequently, companies with ties to U.S. marijuana can still list publicly in Canada and comply with our securities laws, but should consider friendlier alternatives to the TSX/TSX-V, such as the CSE.

Aird Berlis is a law firm specializing in the cannabis industry.

AdminIMJ
The Admin is here to help you with any questions or issues on the InvestInMJ.com site
http://www.investinmj.com/
Author's recent posts